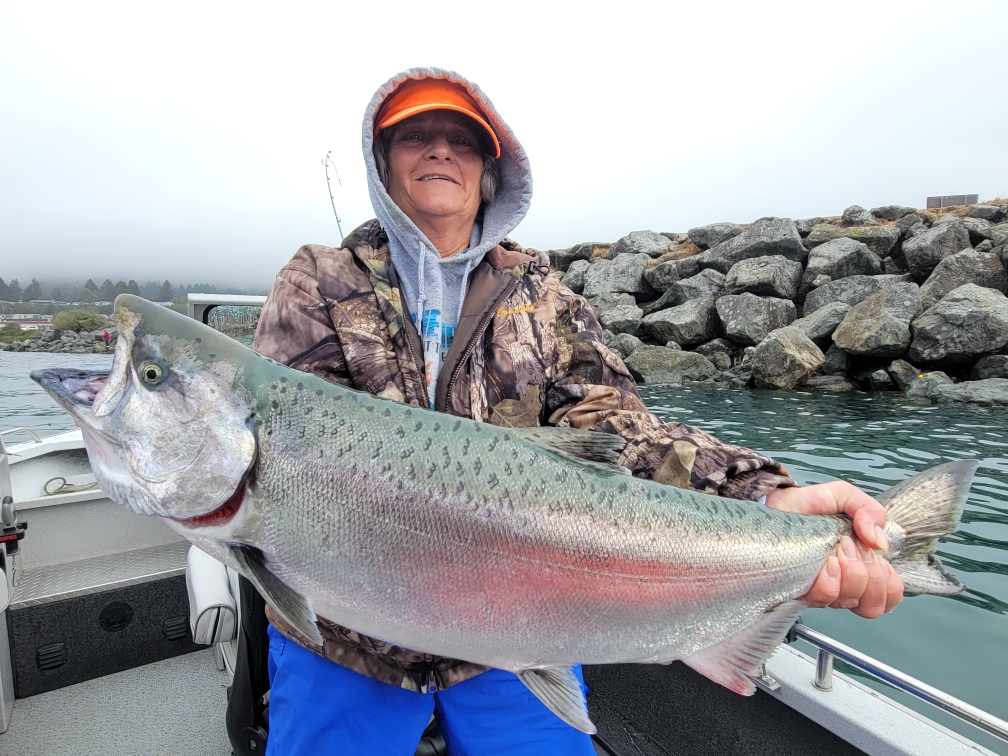 The 2022 salmon season at the mouth of the Chetco River was the best in years, as big numbers of kings stacked up in the estuary waiting for fall rains. Catch rates were the best in recent memory, with guides boats and private boaters catching impressive numbers of wild and hatchery kings. The total run ended up well above average.

The action picked up in late August, with a full kings trickling in, and by early September, the action was already in peak-season form. Limits were caught throughout the season. Capt. Michael, Mick, Sam and Shane ran estuary trips for Wild Rivers Fishing. They trolled anchovies or herring along the jetties, targeting salmon moving in and out of the lower river on the tides. The salmon held up along the jetties until fall rains allowed them to migrate upstream to spawn.

Action remained good through most of October, before significant rains allowed the fish to move into the tidewater. Once more fall rains arrived, our crew switched over to bobber fishing the tidewater areas of the Chetco, and eventually running plugs and back-bouncing roe as major rains arrived in November.

The Oregon Department of Fish and Wildlife indicated the 2022 run was well above average, with lots of hatchery and wild fish returning. Lots of jacks showing in the catch indicate another good year likely in 2023.

The hatchery run received a boost from a fairly new broodstock program where hatchery fish are acclimated in Ferry Creek, the lowest tributary of the Chetco. Those fish tend to hold up in the lower river, where anglers trolling the estuary have an easier shot at caching them. The Oregon South Coast Fishermen club plays a key role in collecting broodstock, which are wild salmon returning to the Chetco. The fish are brought to Elk River Hatchery near Port Orford, where they are spawned. The juvenile salmon are then returned to the Chetco. After a brief time in the river, they migrate to the ocean, then return to the river on a spawning run two to four years later.

Salmon return to the Chetco estuary late August through December. The peak season is September and October. After fall rains, the salmon quickly move upriver, spending little time in the estuary. Winter steelhead arrive late November through March. Wild Rivers Fishing guides target salmon first in the estuary, then upriver in their drift boats. They switch to winter steelhead in late December. Peak season for steelhead is January and February.