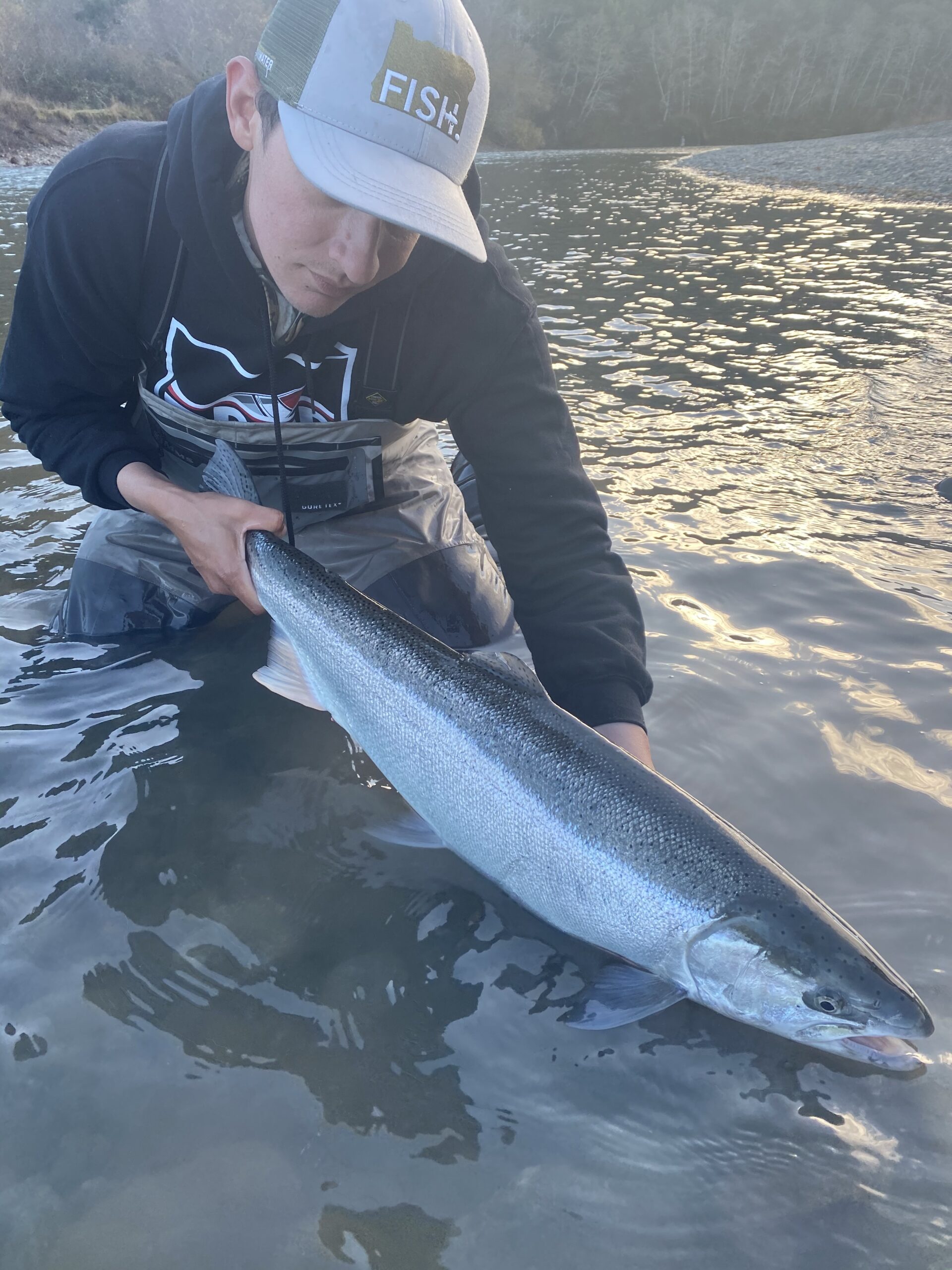 Salmon season has quickly wound down on the Chetco and Smith Rivers, giving way to winter steelhead. This season, steelhead are showing up a littler earlier than normal, which generally indicates an above-average run. Numerous wild and hatchery adult steelhead have already been caught on the Chetco River.

In late November and early December, shore anglers at Social Security Bar began catching steelhead while targeting salmon. Upriver, drift boaters encountered big numbers of halfpounder steelhead and a few adults. Normally, there are a few steelhead in the Chetco by Thanksgiving, but this season the numbers are above average. With several storms expected the week of Dec. 13, the Chetco is expected to hit 6,0000 cfs. As it drops, the peak season for winter steelhead will begin. The best time to target steelhead on the Chetco is late December through early March.

The adult steelhead already caught this season are 8 to 12 pounds. A 15-plus pounder already has been weighed in at the Chetco Outdoor Store in Brookings. As the river drops in the coming week, expect steelhead to be spread out from Social Security Bar, which is the head of tide, all the way to the South Fork.

Our primary technique for catching winter steelhead on the Chetco and Smith rivers is side-drifting roe with light spinning tackle. This is done from drift boats on the scenic coastal rivers of far Southern Oregon and the Smith in Northern California.

Several local, full-time river guides are ready to take anglers fishing this season on the Chetco, Smith, Elk and Sixes rivers. Longtime local guides Andy Martin, Travis Sallander and Rye Phillips will be joined this year by Shane Brooks and Michael McGahan during the drift boat season. Michael and Shane are deckhands during the summer months on the ocean charter boats in Brookings and both have earned their U.S. Coast Guard captain’s licenses. Local guides Mick Thomas and Sam Stover, who guide on both the Smith and Chetco rivers, will be helping the Wild Rivers Fishing crew with some of the larger drift boat groups.

The 2021 calendar is filling up quickly, but there are still some prime dates available with the local Wild Rivers Fishing guides. Andy, Travis and Mick have Forest Service permits to guide on the Upper Chetco, which is a limited entry area for guides. They also have special permits for the Forest Service section of the Smith River. To book a drift boat trip for salmon or steelhead on the Smith or Chetco rivers, call (541) 813-1082.

New for 2021, the daily bag limit for rockfish on the Oregon Coast is six fish a day, up from the five-fish limit the past four years. In addition to the rockfish, two lingcod a day can be kept.

In 2020, Brookings Fishing Charters began running trips to the Point St. George Reef Lighthouse between Brookings and Crescent City. The trip has been a huge hit with customers, with trophy lingcod and trophy-size rockfish a common catch. The lighthouse receives much less pressure than the reefs off of Brookings because of its remote location 11 miles straight out from the harbor. The action is typically fast and furious there.

The lighthouse area is open to fishing May through December. Trips are part of the long-range excursions offered by Brookings Fishing Charters. The charter company also offers half-day bottom fishing out of Brookings, ocean salmon, Pacific halibut and albacore tuna trips. More information is available at www.brookingsfishing.com.