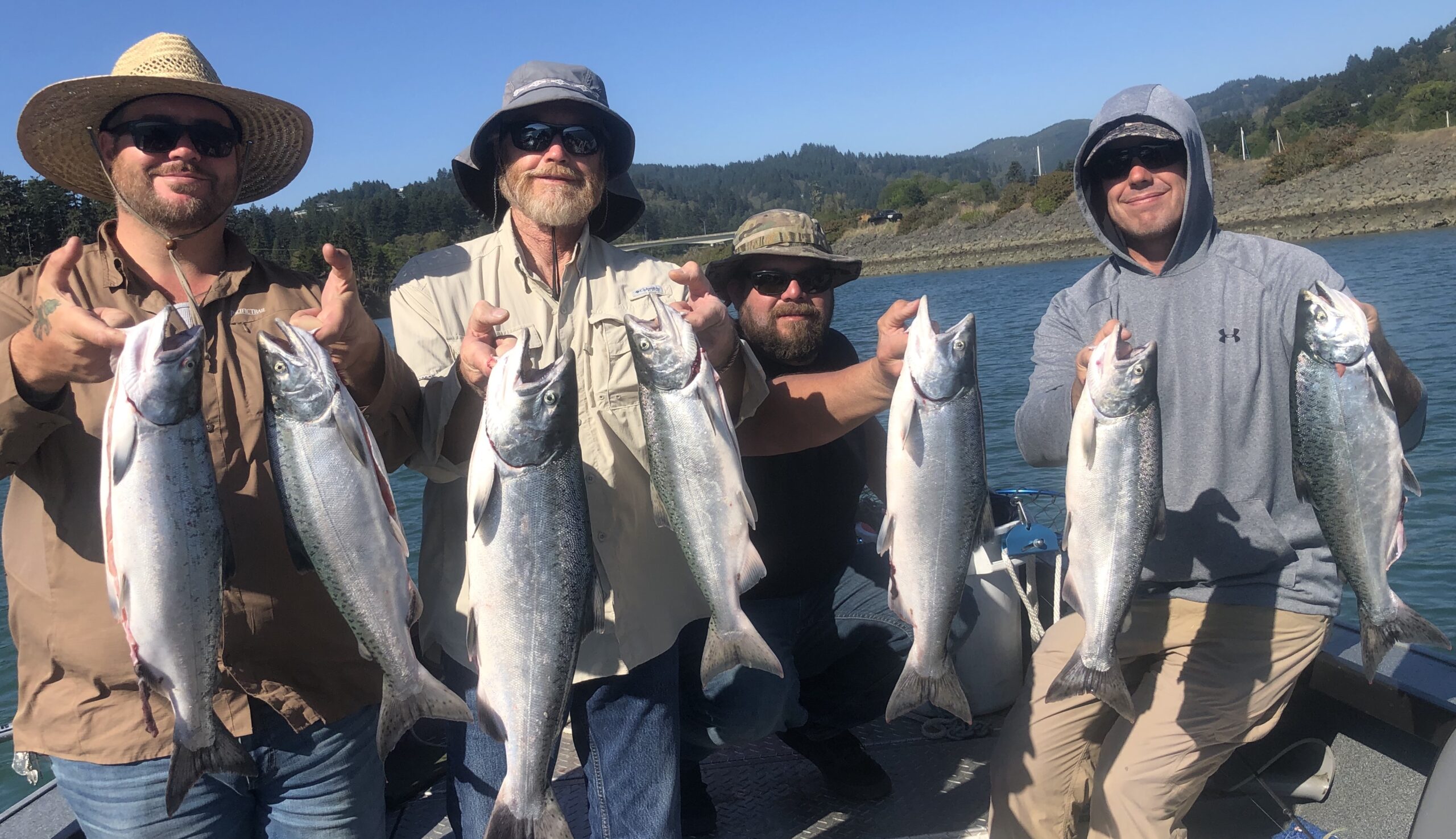 The highly anticipated fall salmon season has begun on the Chetco River, where anglers are focusing on the area near the mouth and awaiting fall rains to start fishing upriver.

Big numbers of jack salmon have already shown up. An abundance of jacks early in the season is generally a strong indicator of good fishing during the peak season upriver, according to longtime Brookings-based guide Andy Martin of Wild Rivers Fishing. Andy has been fishing several Oregon Coast rivers in recent weeks, but will now focusing mainly on the Chetco and Smith rivers since salmon have arrived. He was on the Coos and Millicoma rivers near Coos Bay, Ore., last week, as well as the Umpqua and Rogue rivers in recent weeks.

The Chetco River is the biggest draw in early October because of the potential for a trophy fish. In 2008, one of Andy’s customers caught a 58-pound king at the mouth of the Chetco, the biggest king in recent memory there. He also guided customers into a 65-pound king upriver in recent years, and has guided anglers to more than a dozen salmon over 50 pounds on the Chetco and Smith rivers.

This year, despite ODFW’s forecast of a less-than-stellar return to the Chetco, big numbers of jack salmon have arrived. Several nice adults also have already been caught in the Chetco. The salmon are a bit early, an indication of a strong run, Martin said. The popular bubble season, where anglers fish in the ocean off the mouth of the Chetco in October, was canceled this year by ODFW, but there is a silver lining. That means 1,000 king salmon will not be harvested in the ocean by sport and commercial fishermen this year, adding to the in-river fishery. In years without an October bubble season, the fishing in the estuary and upriver after the rains is often above average.

In recent years, the Chetco estuary has fished better than normal because of the release of 15,000 fall chinook smolts that are acclimated to Ferry Creek, the first tributary of the Chetco above the estuary. Those salmon tend to hold longer in the estuary, fueling the sport fishery in late September and October. Another 100,000 fall chinook smolts are released at Social Security Bar. Lots of hatchery fish are already showing in the catch of the 2020 salmon return. Since the majority of the salmon on the Chetco are wild, that indicates there are a lot of bigger wild fish to come.

Anglers and guides will focus on the Chetco estuary until fall rains come. They will then head upriver on the Chetco, or to the Smith River in Northern California, with their drift boats. Both rivers produce big salmon. Capt. Andy said he will be bobber fishing with eggs, back-bouncing eggs, and running plugs, especially MagLips, HawgNose and FlatFish from Yakima Bait Company.

The limit on the Chetco is one adult salmon a day, wild or hatchery, beginning Oct. 1. Anglers also can keep five jacks a day less than 24 inches. New this year, after an adult salmon is retained, the angler must rack their rod.

The Chetco estuary is currently open. The river above the estuary, marked by the powerlines across the river at rivermile 2.2, opens after significant fall rains. ODFW’s Gold Beach office will decide when to open the river.

The Smith River opens above Rowdy Creek any time flows pass 600 cfs. Until then, fishing is limited to the Sand Hole and mouth areas near Ship Ashore. Capt. Andy will spend some of his time trolling herring at the Sand Hole. He also bobber fishes the area.