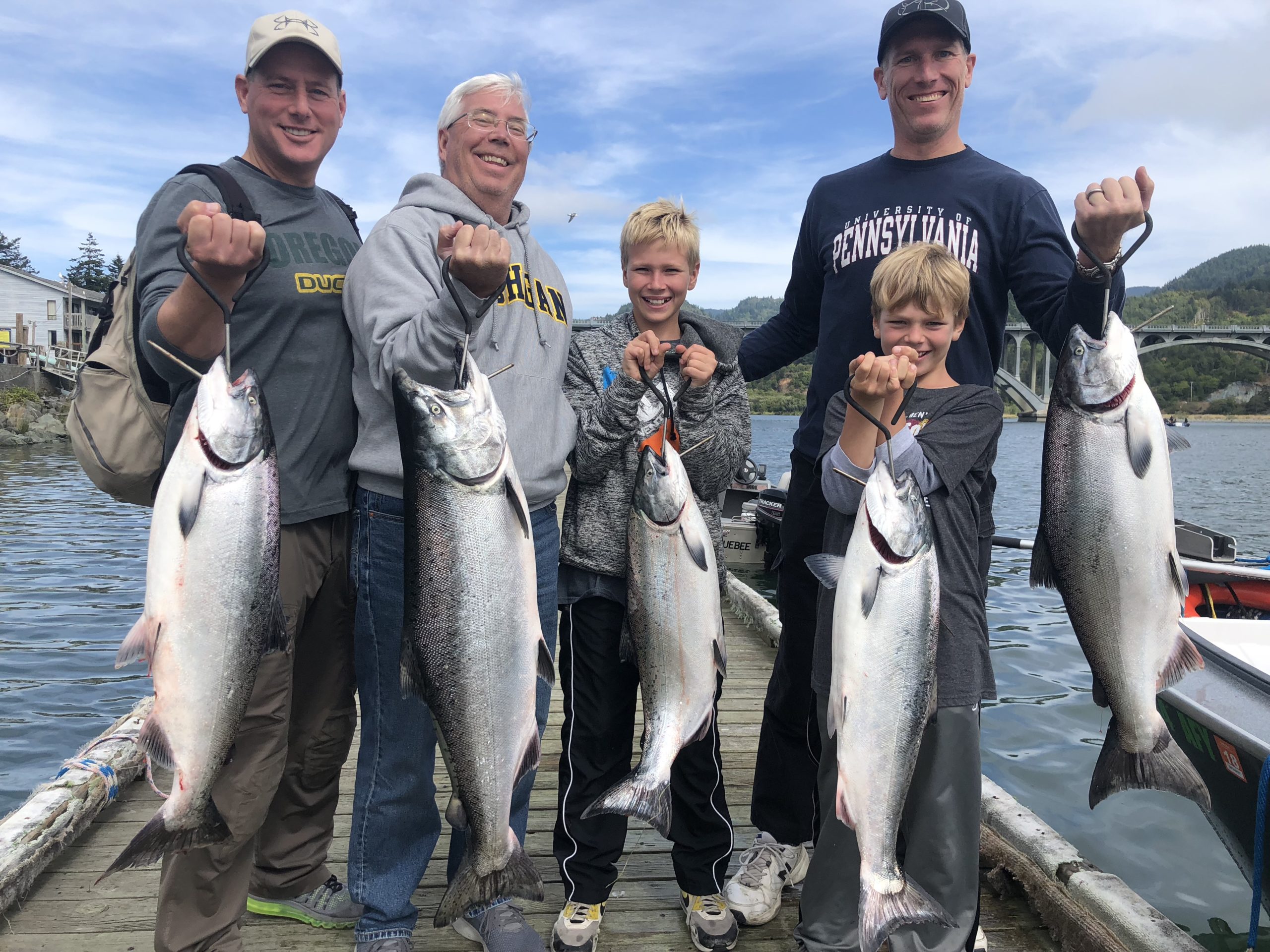 With drift boat steelhead seasons now over on the Southern Oregon Coast, anglers are looking forward to the summer salmon season on the Rogue Bay, where thousands of kings will stack up near the mouth and wait for fall rains before heading upstream.

This year’s fall king salmon forecast for the Rogue is strong. The Oregon Department of Fish and Wildlife estimates the ocean abundance of fall king salmon from the Rogue River is 257,000. Of those, ODFW predicts the in-river run to be around 60,000 adult fall kings.

Salmon begin returning to the bay in June. By early July, fishing is generally fair to good, with peak season in late July and August. Thousands of salmon will arrive in the bay, but warm water above the Highway 101 bridge often keeps them from continuing upstream. The ocean-bright salmon hold in the bay, moving back and forth with the tide until water temperatures in the tidewater area drop below 70 degrees.

The bay is a troll fishery. Guides and other anglers will troll anchovies behind spinner blades. The key is to get an anchovy to rapidly spin and trigger a strike. Veteran guides have years of experience threading anchovies to create that perfect spin. The best guides also know where to find the salmon at certain times in the tide, how much weight to use, how far to let the line out, and how fast to troll.

One of the big draws of the Rogue Bay is the calm, protected water. Ocean-bright fish hold between the historic Gold Beach bridge and the tips of the jetties. Here, anglers don’t have to worry about big waves or sea sickness. The shallow water of the bay also concentrates the salmon into a small area, giving anglers an advantage. Catch rates can be high, with a couple hundred salmon caught in a single day by the dozens of boats trolling.

There are plenty of guides to choose from on the Rogue. Guide Andy Martin of Wild Rivers Fishing is a local, year-round guide based on the Southern Oregon Coast. Many of the guides who fish the Rogue come from outside of the area. Aside from being a local guide, Andy also is a full-time guide, not a hobby guide. Growing up in Brookings, just down the road from Gold Beach and the Rogue Bay, Andy has fished the Rogue for more than three decades and has guided there for more than 15 years.

Last year, the Rogue had big numbers of jack salmon. These 2-year-old salmon are a good indicator of the follow year’s run. In August, guides were catching two to four jacks a person, and losing several more. That should equate to a big numbers of larger adult salmon this summer on the Rogue Bay.

The limit on the Rogue Bay is two adult king salmon a day, plus five jacks less than 24 inches. When fishing is good, anglers expect to catch one to two adults a person. The salmon are in prime shape, bright and full of fat. The Rogue River is known as having the best-tasting salmon in the world. During the World’s Fair in Seattle year ago, there was a taste contest to determine the best-tasting king salmon. The Rogue won!

Andy fishes the Rogue Bay in a custom 26-foot Alumaweld guide sled. It is one of the biggest boats on the bay. He also runs rockfish and lingcod combination trips, fishing the ocean first thing in the morning and then trolling the bay the rest of the day.